Social media has become a part of every person’s daily life today. To add to it, businesses also thrive on these networks. There are so many options available, that they can be misleading to you when you approach it for the first-time. The most frequently asked question is – what is the difference between, Facebook and Twitter. The answer would be everything. Some of the major differences are discussed below: 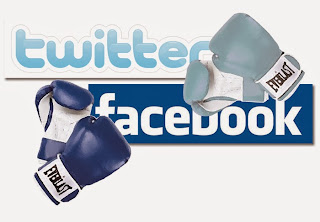 Statistics show that over 90% of activity that happens on Twitter is only visible within an hour of the post being made. But within Facebook updates, interactions tend to go on for hours and days even. It is kind of an ongoing conversation while Twitter is a real-time conversation. Thus, to be able to make a mark on your follower, facebook content strategy has to be something that can pull off an engaged and an informed user while on twitter, short and precise informative posts are the way to go.

On the Facebook platform, people connect with friends, family and acquaintances to keep in touch with them. It is personalised for personal profiles and professional/entertainment if you consider liking brand pages on it. Twitter is more about following the people you want to and getting to know what they want to share; the connection here is more detached.

The posts on Facebook can be discussed about forever, but on Twitter the information is about now - relevant, important and forever changing. Your instant news is tailor-made for Twitter but a less focused post can go on Facebook. Although that should not be a regular activity. If you are posting on your facebook timeline at a time slot when most of your followers are going to be online, it’ll make a complete mess out of it. Thus, building content calenders with proper time scheduling works best for its management.

ALSO READ: How To Promote Business Events On Facebook

Surveys show that 5pm is the optimal time for tweeting while noon is the best time for posting on Facebook because that is when the most attention is showered by the active users. Also, Saturdays tend to be the most popular days on Facebook while Wednesdays are the same for Twitter. This, obviously is different in different geographies. But the statistics have pointed at these timings. Saturdays are laid back and hence people like o be on facebook to catch up and make plans. Twitter is the mid week medicine for most people. You know, like knowing whats happening in the world and to consume some senseless yet witty tweets.

There can be plenty of such differences pointed out between Twitter and Facebook, but what remains unmoved is the fact that Facebook is a much popular social networking site than Twitter. The latter keeps people updated about the current news that does the rounds around the world and also in people’s lives, which is why the conversation trends keep on changing always. This makes it less of a connecting platform than a medium for information. Businesses can thrive easily when depending upon these social networks by building social relationships with followers and fans.


Written By:
Campbell Fox loves to click wildlife and natural settings up. Most amusingly he has a whole collection of pictures he clicked of a Grasshopper that frequents his window pane. Professionally, he consults for a seo company in new york.